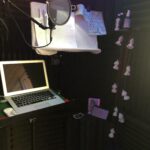 This was originally drafted over four years ago over at stega.org and when tidying up things there I discovered it and brought it here.

Years ago when I was in Inverness I inadvertently absconded with a hand towel from the hotel I stayed at for a few nights.  Fast forward to this weekend and the arrival of a new wall mounted music stand for my studio, and I finally put the towel to good use as a way to dampen any sound bouncing off the new stand.

This change was brought about my that fact that Agent Smith bought a new MacBook Pro and gave me his old Air to replace my 2007 MBP which has served as my studio laptop for a number of years.  It’s so old it cannot run the current version of OS X.  That was ok for a while as it was considered “locked down” to prevent any software updates from mucking with the setup, but over the last year the trade off became less tenable.  Swapping machines wasn’t a clean event though as the older laptop has an IR port which is great when paired with an Apple Remote for starting and stopping a recording.  Plus, with a little piece of an add-on software called Remote Buddy I was even able to handle playback, drop markers and a host of other things.  The MP Air doesn’t have an IR port though, so it really needed to be moved into the booth with me.  The solution for that was handled easily enough:  my old music stand became a shelf for the laptop.  Add to the setup a spare speaker so I can listen through something other than my headphones and wa’la, Studio v2.0 is live.