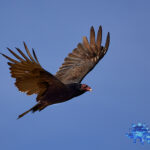 I was up early-ish and fed my two feathered companions of the last couple of decades. The both posed for pictures before they were sequestered in their cages for breakfast and naps.

Then I strapped on my handy Cotton Carrier and walked up the hill to the well tank which is about 110 feet above the main house. There in the stand of trees, the wrens have again made use of one of the nest boxes that were installed back in 2018 thanks to SCVAS hooking me up with a Boyscout. This is the third year in a row that box has seen Bewick action: this time though its House Wrens instead of the usual Bewick’s.

I then went through the person gate and walked up the road to gain another couple hundred feet in elevation.  On the way up I was rewarded with a Rufous-Crowned Sparrow, Anna’s Hummingbird, Lesser Goldfinches, House Finches, and a very photogenic Turkey Vulture that wanted to show off his flying skills.

At the top of the hill the Western Meadowlarks were singing, plus I spotted a Lazuli Bunting and Say’s Phoebe.

On my way back down the hillside I captured pics of a female Red-Winged Blackbird, California Quail, Mourning Doves and Northern Mockingbirds. The second Mockingbird image is a favorite, as you can just make out the shapes of a bird at the top of each power pole.

I walked down the road along our north hillside pasture and continued on towards the creek. A pair of Acorn Woodpecker’s were busy and it seemed the theme for the rest of the morning was going to be “look at the power lines.”

Just a ways down from the industrious woodpeckers the Yellow-Billed Magpies were competing with a pair of California Scrub Jays for berries and perching rights. Then where the road splits, the active Red-Tailed Nest had a parental unit sitting low which hopefully means there are eggs about to hatch.

It was already after 10am, so I decided to take the short route home and turned off at the lower road which circles around back to our southern pasture. Not much along the road, although I did perhaps spot what may have been a Swainson’s Hawk as well as a male Red-Winged Blackbird

I stopped off to chat with a neighbor about road stuff and then continued on, steeling myself to tackle the climb up through out our south pasture — there’s about a 200ft elevation difference between it and where the house sits. On the way up I checked on some of the nest boxes and was delighted to find the five wee Western Bluebird hatchlings in Rodeo Ring East are growing quickly. Plus the southern pair of Red-Tails were out and about: their favorite hangouts are the half a dozen or so poles that run electrical service up to the main house and then on to the secondary meter for the main gate. Finally reaching the top of the trail, I paused outside the derelict stables where the Barn Swallows were out in force.

Finally made it back to the house where I made a fresh latte and settled in to watch the goings on in the north garden.

A White-Crowned Sparrow as well as a Gold Crowned were still in residence, plus our shy resident Wild Turkey. I’d taken pics of Black Phoebes up the hill and out by the barn, but one flew in to drink from the bath and I just caught it as it left. Both species of Orioles that live here showed up: Bullocks and Hooded, plus our resident California Thrashers, White-Throated Sparrow and our California Towhee shared his/her bath with a Spotted Towhee.

The event was only for four hours, so while the Lawrence Goldfinches, Allen’s Hummingbirds, and other residents did visit the garden, it wasn’t until later in the day. Still, it was a good morning walk, but I must say I’m looking forward to my 1.4 lens extender arriving — it’s currently on backorder.